Grand Cayman, Cayman Islands, October 31, 2018. CCRIF SPC (formerly the Caribbean Catastrophe Risk Insurance Facility) announced today that for the second year in a row, Trinidad & Tobago received a payout on its Excess Rainfall policy following a period of heavy rainfall in October. The Government received a payout of US$2,534,550 (approximately TT$17 million) due to heavy rains between October 18 and 20 2018.

Bridgetown, Barbados, October 22, 2018. On Friday October 19th, Barbados Prime Minister Honourable Mia Amor Mottley met with CCRIF CEO Mr. Isaac Anthony, Deputy Chairperson Mrs. Desirée Cherebin and Board member Mrs. Faye Hardy at a short ceremony to mark the payout by CCRIF to the Government of Barbados following the passage of Tropical Storm Kirk in October. The payout of US$5.8 million – or BDS$11.6 million – was made under the country’s Excess Rainfall policy and was made within 14 days of the event.

Grand Cayman, Cayman Islands, October 9, 2018. CCRIF SPC (formerly the Caribbean Catastrophe Risk Insurance Facility) announced today that Barbados will receive a payout of US$5,813,299 (approximately BDS$11.6 million) on its Excess Rainfall policy due to heavy rainfall that occurred during the passage of Tropical Storm Kirk.

Barbados has been a member of CCRIF since its inception in 2007 and has received five previous payouts totaling US$13.5 million. This payout will bring the total value of payouts to Barbados to US$19.3 million – as shown in the table below.

Grand Cayman, Cayman Islands, September 21, 2018. CCRIF SPC is pleased to announce its UWI-Scholarship and CCRIF Scholarship (extra-regional) winners for 2018. This year, CCRIF provided scholarships valued at US$129,000 to 14 Caribbean nationals. CCRIF provides scholarships and internships each year to Caribbean nationals as part of its Technical Assistance (TA) Programme. CCRIF which is akin to a not-for-profit organization, uses profits made to benefit its members through reductions in premium costs and by funding the Technical Assistance Programme.

Grand Cayman, Cayman Islands, July 2, 2018. CCRIF SPC is pleased to announce the appointment of Mr. Timothy Antoine as Chairman of 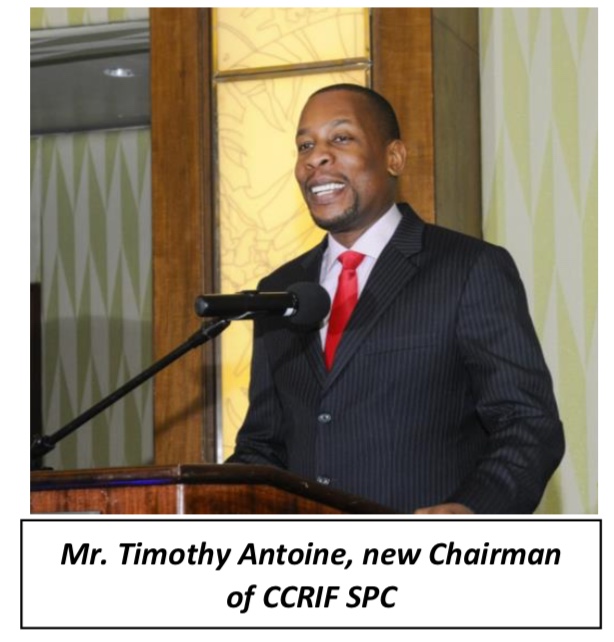 CCRIF SPC, effective July 1, for a 3-year term. Mr. Antoine succeeds Mr. Milo Pearson who chaired CCRIF’s board from its inception in 2007 and has now retired.

Grand Cayman, Cayman Islands, May 30, 2018. CCRIF CEO, Mr. Isaac Anthony received the Influential Individual of the Year Award at the Reactions 7th Latin America Re/Insurance Awards event held in Miami on May 24th. According to Reactions, the award was provided “in light of the work the organisation has done to provide post-disaster relief to the various islands within its pool membership that were impacted by the devastation wreaked by Hurricanes Irma and Maria”.

Grand Cayman, Cayman Islands, April 9, 2018. On March 19, 2018, CCRIF SPC hosted a Stakeholder Retreat in Miami, USA, as part of its 10th Anniversary Celebrations to bring together representatives from member countries, regional organizations and international development partners to help define the facility’s strategic direction to 2030 and determine how CCRIF can further support the countries in the region.