What is the ADC?

The ADC is a special feature of CCRIF’s tropical cyclone (TC) and earthquake (EQ) parametric insurance policies. The ADC was designed to potentially provide a payment for TC and EQ events that are objectively not sufficient to trigger the country’s main policy because the modelled loss is below the policy attachment point (which is similar to a deductible). The ADC also helps to address the issue of  basis risk which is an inherent feature of parametric insurance in which some hazard events are missed by the models underpinning the policies. In this case, the ADC is able to reduce the probability of a missed payment when there may be losses on the ground but the country’s parametric insurance policy is not triggered.

When was the ADC Launched?

In 2017, CCRIF launched the ADC feature for its tropical cyclone and earthquake policies, which it provided at no cost to members to commemorate the Facility’s 10th anniversary. Since the launch of this feature, CCRIF has continued to provide it to members at no cost except for one policy year when members were offered a 50 per cent discount on the cost of the feature.

Have there been any payouts under the ADC? 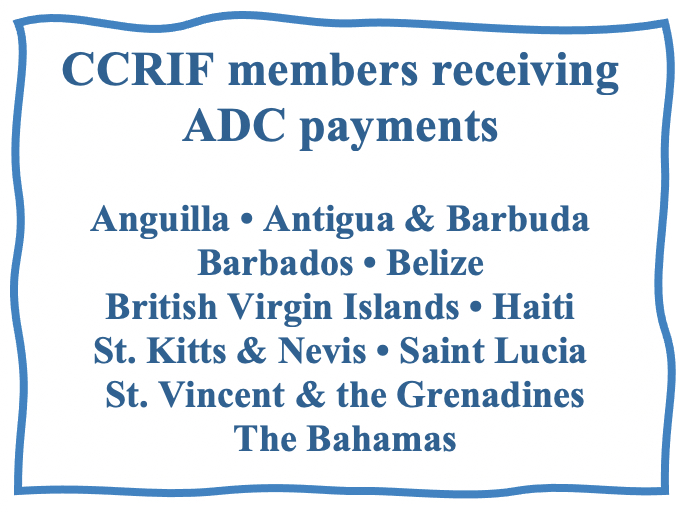 Payments were made following Tropical Cyclones Irma and Maria in 2017, Dorian in 2019 and Isaias, Laura and Nana in 2020 – as well as an earthquake in Haiti in October 2018. In many cases the ADC payments associated with tropical cyclones were in addition to payouts on countries’ Excess Rainfall (XSR) policies, which were triggered by rains associated with those events. Like all CCRIF payouts, ADC payments are made within 14 days of the event.

How are ADC payments calculated?

What is the maximum payout a country can receive under the ADC?

The maximum ADC payment a country can receive after an event is the net premium paid for the TC or EQ policy by that country.