Kingston, Jamaica, April 15, 2013 – On Friday April 12, 2013 the Government of Jamaica and the Caribbean Catastrophe Risk Insurance Facility (CCRIF) signed a Memorandum of Understanding (MoU), formalising a donation of US$100,000 made by CCRIF to the Government of Jamaica to support Jamaica’s post-disaster recovery and restoration initiatives following the effects of Hurricane Sandy in October 2012.  The MoU signing and exchange took place at the Ministry of Finance and Planning in Kingston, Jamaica. 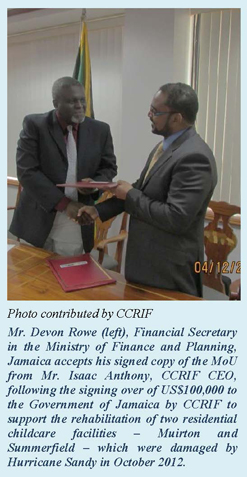 “deductible”. In his remarks at the signing ceremony, CCRIF CEO, Mr. Isaac Anthony pointed out that “when a CCRIF policy is triggered it usually represents severe impacts with much death and destruction, because risk transfer represents that component of a country’s disaster strategy that comes into play when losses are so extreme that usual national budgets are not able to address the extent of losses.”   He stated that, as a region, “We believe that the CCRIF model, as an innovative risk transfer option, has an important role to play in disaster risk management strategies for Caribbean countries vulnerable to hurricanes and earthquakes.”
Mr. Anthony reiterated that CCRIF “is more than just an insurance company – it is a partner with our member countries in national development” and it is in this light that the Board of CCRIF opted to make a discretionary grant to Jamaica to assist in post-Sandy recovery.
Within a month after the passage of Sandy, CCRIF began discussions with the Government of Jamaica to explore ways in which the Facility could provide assistance for the country’s recovery efforts. Based on discussions with Jamaica’s Ministry of Finance and Planning, the Office of Disaster Preparedness and Emergency Management (ODPEM) and other stakeholders, an agreement was reached to use the funds to support the rehabilitation of two residential childcare facilities – Muirton and Summerfield – which were damaged by the hurricane. Muirton and Summerfield Childcare Centres provide homes and opportunities to create successful, independent futures for 43 Jamaican boys between the ages of 7 and 18.  The funds will help to ensure that the facilities are rehabilitated in a manner that will enable them to withstand future hurricane impacts so that they will continue to provide the shelter and services that the boys need.
Similar donations are being granted to Haiti and the Bahamas, two other CCRIF member countries which were badly affected by Hurricane Sandy. CCRIF is pleased to be able to help those countries to meet their priority needs in the aftermath of the hurricane.
The Caribbean Catastrophe Risk Insurance Facility remains committed to working with Caribbean governments and their communities to better understand and reduce the socio-economic and environmental impacts of natural catastrophes while contributing to the long-term sustainable development of the region.
About CCRIF: CCRIF is a not-for-profit risk pooling facility, owned, operated and registered in the Caribbean for Caribbean governments. It is designed to limit the financial impact of catastrophic hurricanes and earthquakes to Caribbean governments by quickly providing short-term liquidity when a policy is triggered.  It is the world’s first regional fund utilising parametric insurance, giving Caribbean governments the unique opportunity to purchase earthquake and hurricane catastrophe coverage with lowest-possible pricing.  CCRIF represents a paradigm shift in the way governments treat risk, with Caribbean governments leading the way in pre-disaster planning. CCRIF was developed through funding from the Japanese Government, and was capitalised through contributions to a multi-donor Trust Fund by the Government of Canada, the European Union, the World Bank, the governments of the UK and France, the Caribbean Development Bank and the governments of Ireland and Bermuda, as well as through membership fees paid by participating governments.
Since the inception of CCRIF in 2007, the Facility has made eight payouts totalling US$32,179,470 to seven member governments. All payouts were transferred to the respective governments less than a month (and in some cases within a week) after each event.
English