Grand Cayman, Cayman Islands, October 20, 2016 – On Monday October 17, CCRIF SPC completed payments totalling US$29,204,248 to the four CCRIF member countries affected by Hurricane Matthew. These payouts were made to Haiti, Barbados, Saint Lucia and St. Vincent & the Grenadines on their Tropical Cyclone and/or Excess Rainfall insurance policies – all within 14 days of the end of the event. 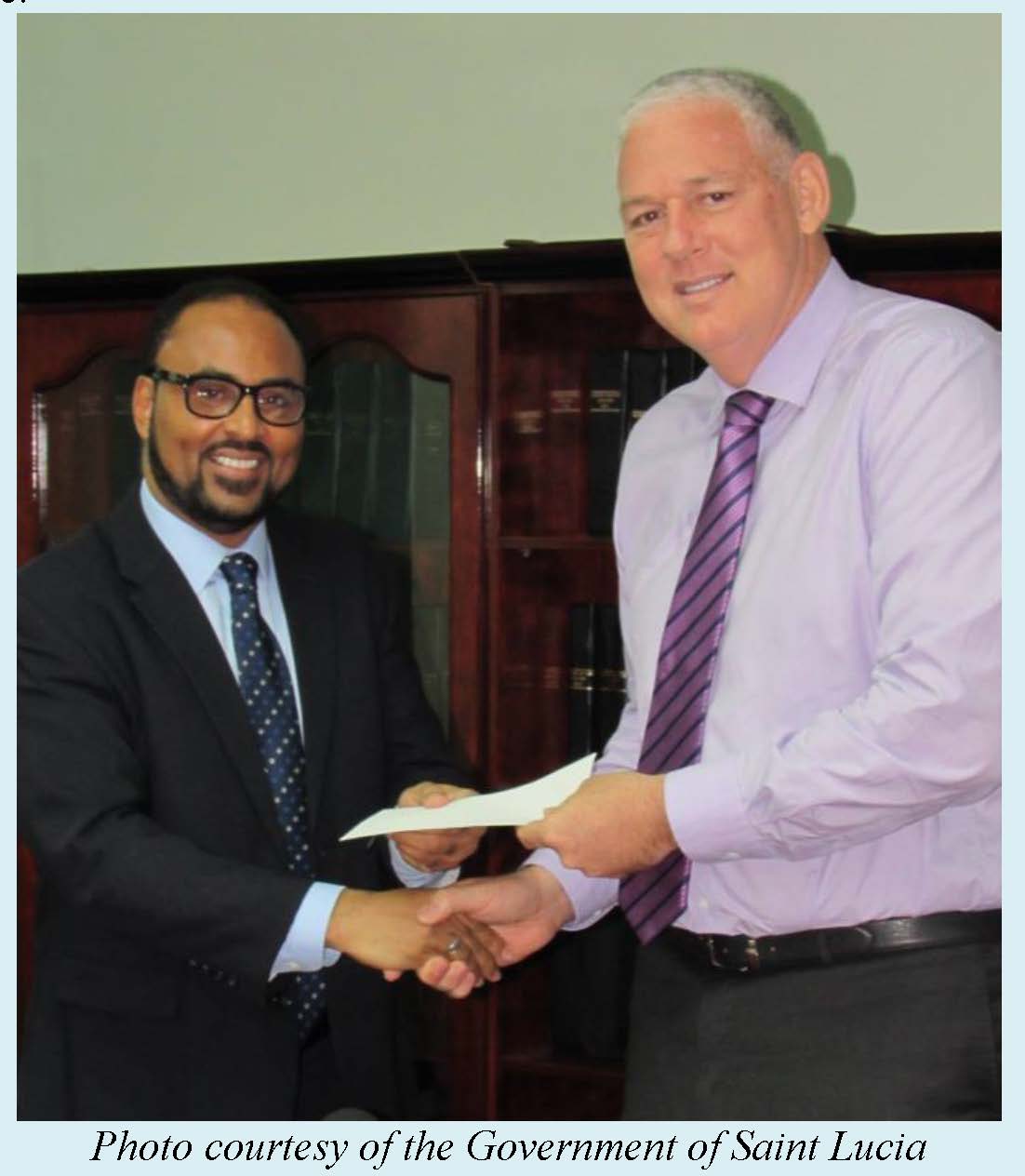 Prime Minister Chastanet indicated that “This cheque will be going directly to strengthening and rebuilding our agriculture sector and to paying for some of the costs that we have.” Mr. Anthony congratulated Saint Lucia on its commitment to securing catastrophe insurance through CCRIF and stressed that it is essential for all countries to have some form of disaster risk coverage.

Since CCRIF’s inception in 2007, the facility has made a total of 21 payouts to 10 member governments totalling almost US$68 million.
CCRIF members consistently indicate that these rapid payouts are an invaluable benefit of membership. Almost immediately after an event, CCRIF is able to inform countries if their policies were triggered and if so, the approximate payout amount. These infusions of cash within two weeks after an event are critical for immediate repair and recovery activities.

Small farmers and other individuals in Saint Lucia also benefited from quick insurance payouts due to Tropical Cyclone Matthew. Thirty-one individuals in Saint Lucia received payouts totalling US$102,000 on their Livelihood Protection Policies (LPPs). This microinsurance product was developed under the Climate Risk Adaptation and Insurance in the Caribbean Project implemented by the Munich Climate Insurance Initiative (MCII) in collaboration with CCRIF, MicroEnsure and Munich Re.

The Livelihood Protection Policy provides insurance coverage to low-income persons such as small farmers, day labourers, tourism workers, fisherfolk etc. for extreme weather events such as rainfall and wind.  Like CCRIF’s sovereign products, the LPP is parametric and therefore payouts can be made very quickly and all payouts were made within 14 days of Matthew’s passage through Saint Lucia.

The LPP also is available in Jamaica and Grenada and MCII, CCRIF and other partners plan to expand access to other countries in the region starting early next year. The sovereign insurance purchased by CCRIF member countries is effectively complemented by microinsurance at the individual level, which supports people whose livelihoods can be affected by natural hazard events without them having to wait for help from other sources like the Government.

CCRIF notes that countries can employ a range of disaster risk management and financing strategies in an attempt to enhance resilience and reduce vulnerability. These may include both risk mitigation and risk transfer strategies such as insurance. Broadening access to risk transfer has been cited as a necessary part of climate change adaptation. With respect to risk financing, two main types of strategies are usually pursued – ex-ante and ex-post strategies. Ex-post instruments do not require advance planning and include, for example, budget reallocation after a disaster hits, tax increases and donor assistance.

On the other hand, using ex-ante risk financing instruments such as CCRIF requires proactive advance planning and involves investing in national catastrophe risk management prior to a natural disaster occurring.  Such strategies allow governments to reduce their budget volatility through a combination of self-retention (for example, dedicated domestic reserve funds) and risk transfer instruments (such as insurance that CCRIF provides). The use of risk transfer mechanisms can therefore be seen to be taking a proactive and comprehensive approach to disaster risk management, one that also focuses on fiscal and debt sustainability, towards safeguarding national growth prospects.

About CCRIF SPC: CCRIF SPC is a segregated portfolio company, owned, operated and registered in the Caribbean. It limits the financial impact of catastrophic hurricanes, earthquakes and excess rainfall events to Caribbean and – since 2015 – Central American governments by quickly
providing short-term liquidity when a parametric insurance policy is triggered. It is the world’s first regional fund utilising parametric insurance, giving member governments the unique opportunity to purchase earthquake, hurricane and excess rainfall catastrophe coverage with lowest-possible pricing. CCRIF was developed under the technical leadership of the World Bank and with a grant from the Government of Japan. It was capitalized through contributions to a Multi-Donor Trust Fund (MDTF) by the Government of Canada, the European Union, the World Bank, the governments of the UK and France, the Caribbean Development Bank and the governments of Ireland and Bermuda, as well as through membership fees paid by participating governments. The Central America SP is capitalized by contributions to a special MDTF by the World Bank, European Commission and the governments of Canada and the United States.
English