November 7, 2016. Port-au-Prince, Haiti - Today the CEO of CCRIF SPC, Mr. Isaac Anthony met with Haiti’s Minister of Finance, Hon. Yves Bastien and his advisors to discuss the recent payouts of US$23.4 million to Haiti made under the country’s tropical cyclone and excess rainfall policies, as a result of Hurricane Matthew’s passage through that country last month. This is the largest payment ever made by CCRIF for a single event - with total payouts to Haiti representing approximately 46% of all payments made by CCRIF since its inception in 2007.  Haiti has received 3 payouts to date – one in 2010 following the devastating earthquake in January that year and these two for Hurricane Matthew.

At today’s meeting, Minister Bastien thanked CCRIF for the payouts and more so for the short timeframe in which the resources were received. He highlighted that although many have pledged support to Haiti in the aftermath of Hurricane Matthew, much of that assistance has not yet been received. He commended CCRIF on its model which guarantees payouts within 14 days of an event. He indicated that total losses as a result of Matthew are estimated at US$1.9 billion or 20% of the country’s gross domestic product (GDP). Minister Bastien said that while it may appear that the payment of US$23.4 million from CCRIF is small compared to total losses, it is very significant and so far has been able to provide much needed support as follows:

Approximately 50% of the payment remains to be spent.

In his response, CCRIF CEO Mr. Isaac Anthony expressed condolences to the Government and people of Haiti on the loss and life and property as a result of Hurricane Matthew. He expressed CCRIF’s commitment to further lend support to the Government in implementing its comprehensive disaster risk management strategy, including finding solutions to increase the country’s catastrophe risk insurance coverage with CCRIF. He also outlined support for officials in the Ministry of Economy and Finance, the environment ministry, disaster management officials and the Meteorology Service to receive training in catastrophe risk management and risk transfer early next year through the CCRIF Training Programme.

Mr. Anthony also made mention of the CCRIF Internship Programme in which young university graduates in the region could benefit from work experience in the area of disaster risk management and urged those in attendance to ensure that young Haitians apply. Mr. Anthony pointed out that under the CCRIF Small Grants Programme, community-based and non-governmental organizations as well as academic institutions are able to receive up to US$25,000 to support community-based activities that would enhance resilience to natural hazards. He pointed out that two NGOs in Haiti – FADA and GAENO – were already recipients of funds through this programme. NGOs working in the South are encouraged to apply to the CCRIF Small Grants Programme to support rehabilitation activities there including projects that focus on reafforestation especially since some 80% of the trees in the South were lost due to Hurricane Matthew.

A contingent from the Caribbean Development Bank (CDB) who were also in attendance were thanked for the Bank’s continued support to Haiti and in particular for the payment of Haiti’s insurance premium to CCRIF for the last five years.

In closing, the CCRIF CEO said “The CCRIF model demonstrates that as a region we can come together to solve our problems, but we can also develop models that become examples for other regions of the world”. He said this in light of the fact that CCRIF was created as an immediate response to Hurricane Ivan in 2004 when, following its passage, the Caribbean Community (CARICOM) Heads of Government held an emergency meeting to discuss critical issues surrounding the need for the provision of catastrophe risk insurance for its members. Consequently, CARICOM approached the World Bank for assistance to design and implement a cost-effective risk transfer programme for member governments. This marked the beginning of what would become the Caribbean Catastrophe Risk Insurance Facility – or CCRIF. Globally, CCRIF continues to gain recognition – especially as it relates to the paradigm shift in the way governments treat risk. Internationally, Caribbean governments continue to be recognized for leading the way in pre-disaster planning. In fact, other facilities similar to CCRIF have been set up using the CCRIF model as its template. 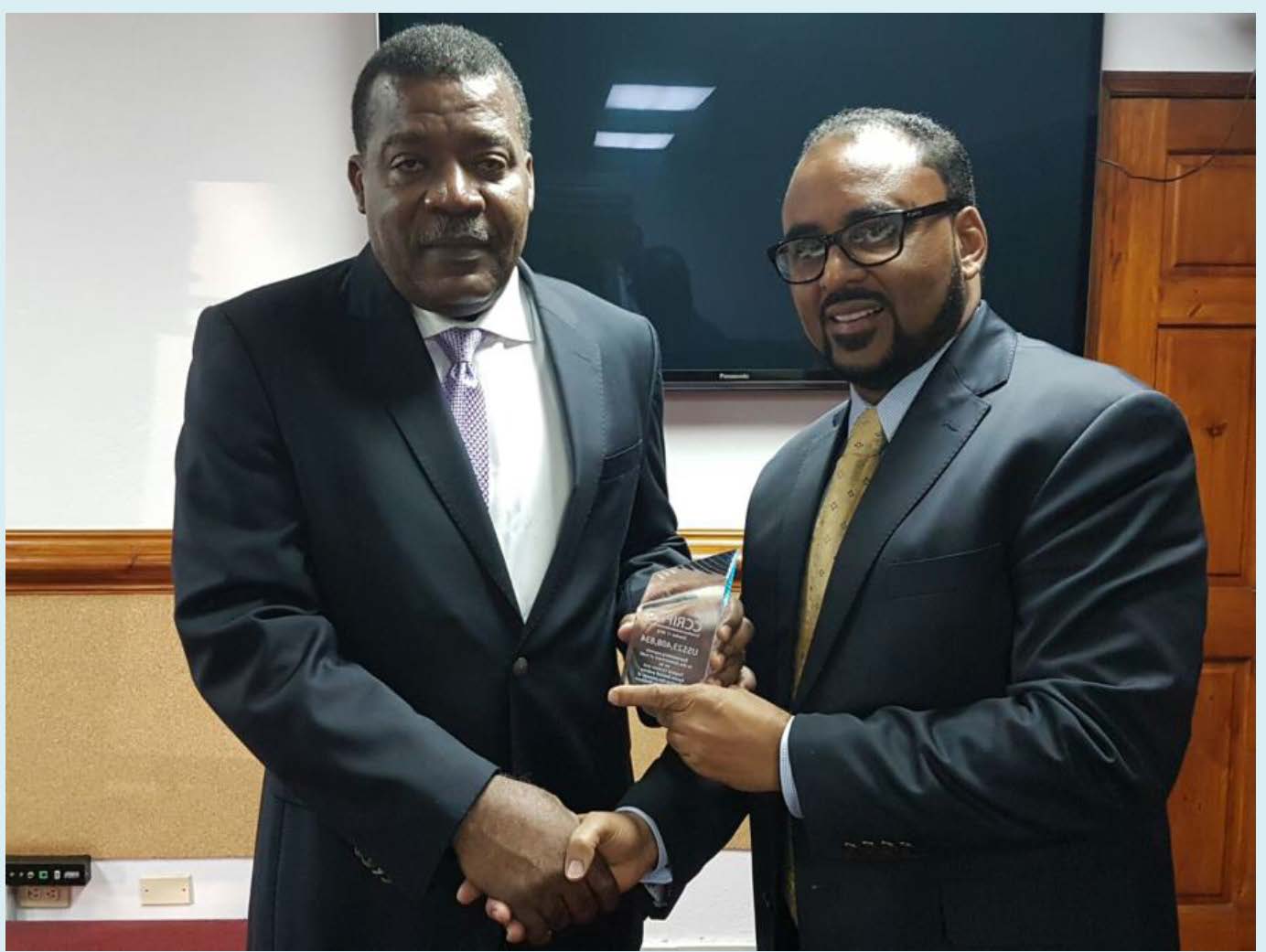 CCRIF CEO, Mr. Isaac Anthony (right) presents a memento symbolizing payouts of US$23.4 million to Hon. Yves Bastien, Haiti’s Minister of Finance at a ceremony on November 7, 2016. The payouts were due on Haiti’s tropical cyclone and excess rainfall policies due to Hurricane Matthew and payment was paid 14 days after the event on October 17, 2016. 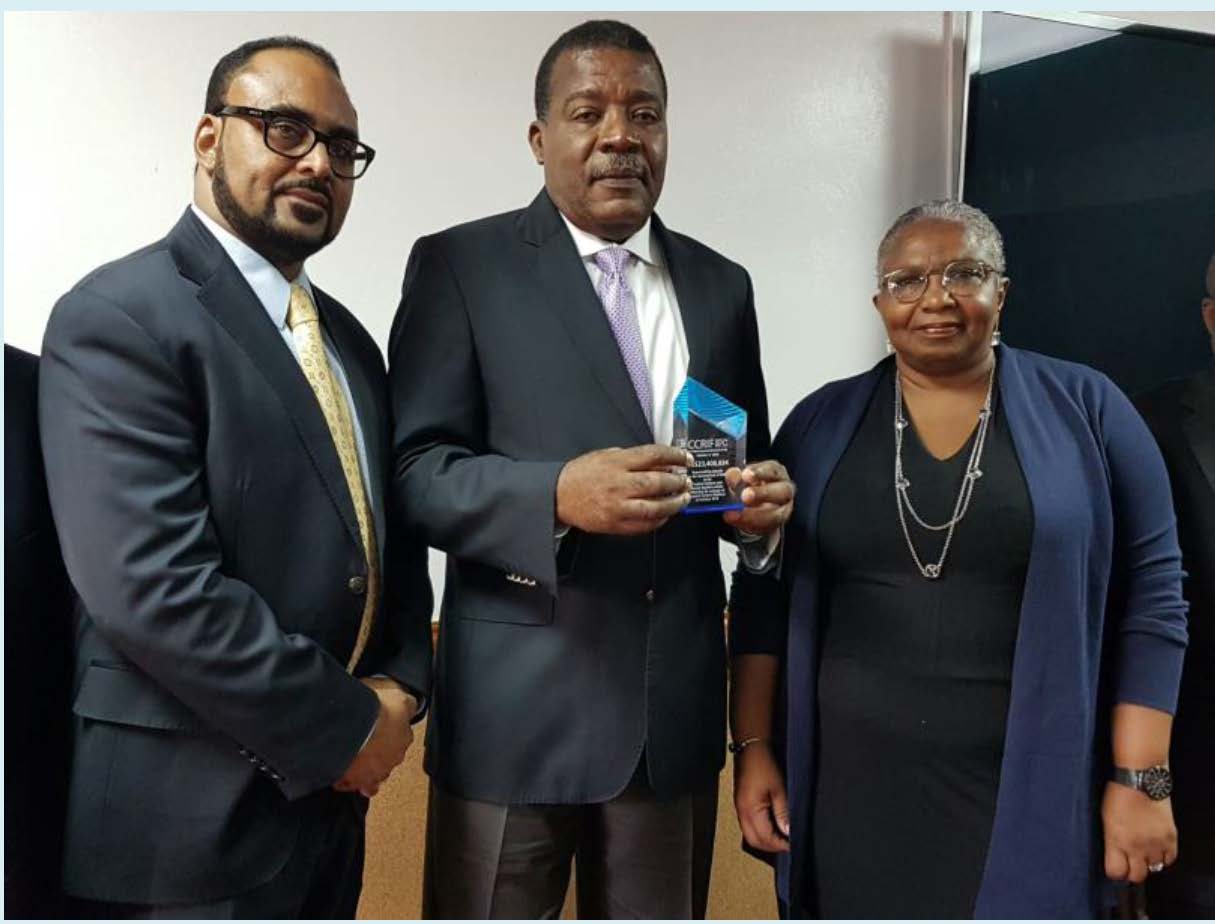 Left to Right: Mr. Isaac Anthony - CCRIF CEO, Hon. Yves Bastien - Haiti’s Minister of Finance, and Ms. Cheryl Dixon - Head of the Sustainable Development Unit at the Caribbean Development Bank (CDB) at a ceremony recognizing payment of US$23.4 million by CCRIF to the Government of Haiti on its tropical cyclone and excess rainfall policies. The CDB has paid Haiti’s CCRIF policy premiums for the past five years. 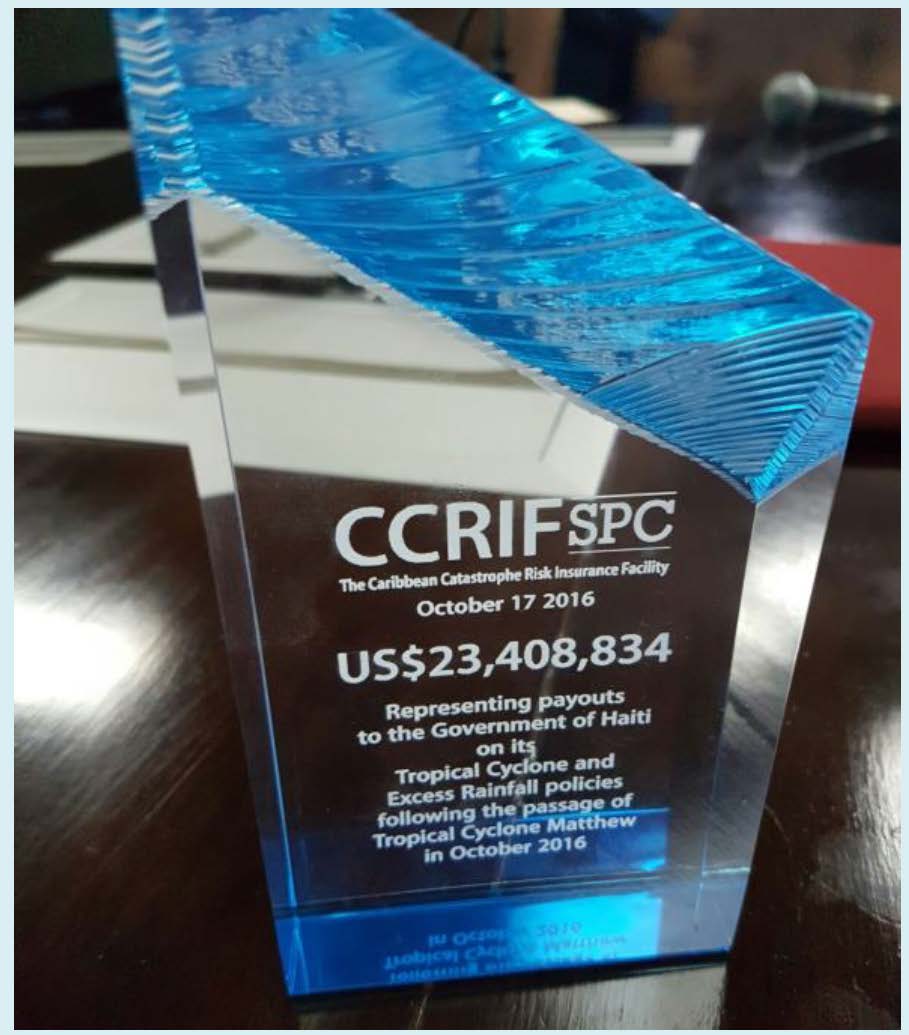 Memento symbolizing the payouts of US$23.4 million made by CCRIF to the Government of Haiti on October 17, 2016 - 14 days after Hurricane Matthew affected the island. The payouts were made on Haiti’s tropical cyclone and excess rainfall policies, which were triggered by Matthew.

About CCRIF SPC: CCRIF SPC is a segregated portfolio company, owned, operated and registered in the Caribbean. It limits the financial impact of catastrophic hurricanes, earthquakes and excess rainfall events to Caribbean and – since 2015 – Central American governments by quickly providing short-term liquidity when a parametric insurance policy is triggered. It is the world’s first regional fund utilising parametric insurance, giving member governments the unique opportunity to purchase earthquake, hurricane and excess rainfall catastrophe coverage with lowest-possible pricing. CCRIF was developed under the technical leadership of the World Bank and with a grant from the Government of Japan. It was capitalized through contributions to a Multi-Donor Trust Fund (MDTF) by the Government of Canada, the European Union, the World Bank, the governments of the UK and France, the Caribbean Development Bank and the governments of Ireland and Bermuda, as well as through membership fees paid by participating governments. The Central America SP is capitalized by contributions to a special MDTF by the World Bank, European Commission and the governments of Canada and the United States.
English