CCRIF Welcomes Guatemala to the Facility 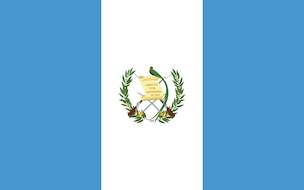 Grand Cayman, Cayman Islands, October 16, 2019. CCRIF SPC is pleased to welcome the Government of Guatemala to the Facility as its third Central American member. Guatemala has purchased parametric insurance cover for excess rainfall for the 2019/20 policy year. CCRIF’s membership now stands at 22 countries – 19 from the Caribbean and 3 from Central America.

CCRIF, established in 2007, provides parametric insurance coverage for tropical cyclones, earthquakes and excess rainfall to limit the financial impact of these catastrophes by quickly providing financial liquidity when a policy is triggered. The Facility was originally established for Caribbean governments, but in 2015, CCRIF signed a Memorandum of Understanding with the Council of Ministers of Finance of Central America, Panama and the Dominican Republic (COSEFIN) to enable Central American countries to join the Facility. Nicaragua was the first Central American country to join and has been a member of CCRIF since 2015. In its first year, the Government received two payouts totalling US$1.6 million on its earthquake and tropical cyclone policies. Guatemala joins Nicaragua and Panama as CCRIF’s three Central American members.

CCRIF provides parametric insurance coverage to the two regions through different segregated portfolios or cells. CCRIF aggregates disaster risks within the two regions but keep the risks segregated across regions, achieving the kind of risk diversification and spreading within each zone that members are not able to attain on their own and reducing costs by sharing operational services between both regions. Empirical evidence based on studies undertaken by the World Bank illustrates that insurance obtained through CCRIF could be as low as half the cost of coverage a member country could obtain by approaching the reinsurance market on its own.

Since 2007, CCRIF has made 41 payouts totalling US$152 million to 13 member governments. In September of this year, the Government of The Bahamas received a payout of US$12.8 million after Hurricane Dorian. Earlier this month, the Government of Trinidad and Tobago received a payout of US$362,982 on its excess rainfall policy for Tobago following an excess rainfall event associated with Tropical Cyclone Karen. Trinidad and Tobago has two separate excess rainfall policies – one for each island. All payouts were made within 14 days of the events – and in the case of The Bahamas, 50 per cent of the payout was made within 7 days to provide immediate funds for priority activities.

CCRIF CEO Mr. Isaac Anthony reiterates that “CCRIF was not designed to cover all losses on the ground, but rather to provide a quick injection of liquidity following a natural disaster for emergency relief and early recovery needs, thereby reducing post-disaster resource deficits and government budget volatility”. It is within this context that CCRIF remains committed to its goals of scaling up, which would allow for increasing membership as well as increasing the coverage level of existing members and the development of new products and services for its current and prospective members, thereby supporting countries’ overall objectives of advancing their sustainable development prospects. With respect to new products, in July of this year, CCRIF, in collaboration with the World Bank and the US State Department, introduced coverage for the fisheries sector for two member countries – Saint Lucia and Grenada. This product was developed under the Caribbean Oceans and Aquaculture Sustainability FaciliTy (COAST) initiative and provides coverage for fisherfolk and other players in the fisheries industry. The COAST product will be offered to other countries in the near future. Also, the Facility is developing products for drought, agriculture and public utilities – all with the goal of meeting the demand of current and prospective members in both the Caribbean and Central America.

CCRIF, through the catastrophe risk insurance that it provides, is a critical component of a country’s disaster risk financing strategy and climate change adaptation framework. CCRIF is pleased that the Government of Guatemala is including catastrophe risk insurance among the suite of disaster risk financing tools that it utilizes, which also includes an emergency fund and a Cat-DDO, among others.

CCRIF is able to make quick payments because it offers parametric insurance policies. Parametric insurance policies are insurance contracts that make payments based on the intensity of an event (for example, hurricane wind speed, earthquake intensity, volume of rainfall) and the amount of loss calculated in a pre-agreed model caused by these events. Therefore, payouts can be made very quickly and CCRIF is committed to making payments within 14 days of an event that triggers a country’s policy. This is different from traditional or indemnity insurance settlements that require an on-the-ground assessment of individual losses after an event before a payment can be made. CCRIF and the risk insurance it provides will play a key role in advancing Agenda 2030 sustainable development goals and generally development that “leaves no one behind”.

About CCRIF SPC: CCRIF SPC is a segregated portfolio company, owned, operated and registered in the Caribbean. It limits the financial impact of catastrophic hurricanes, earthquakes and excess rainfall events to Caribbean and – since 2015 – Central American governments by quickly providing short-term liquidity when a parametric insurance policy is triggered. It is the world’s first regional fund utilising parametric insurance, giving member governments the unique opportunity to purchase earthquake, hurricane and excess rainfall catastrophe coverage with lowest-possible pricing. CCRIF was developed under the technical leadership of the World Bank and with a grant from the Government of Japan. It was capitalized through contributions to a Multi-Donor Trust Fund (MDTF) by the Government of Canada, the European Union, the World Bank, the governments of the UK and France, the Caribbean Development Bank and the governments of Ireland and Bermuda, as well as through membership fees paid by participating governments. In 2014, an MDTF was established by the World Bank to support the development of CCRIF SPC’s new products for current and potential members, and facilitate the entry for Central American countries and additional Caribbean countries. The MDTF currently channels funds from various donors, including: Canada, through Global Affairs Canada; the United States, through the Department of the Treasury; the European Union, through the European Commission, and Germany, through the Federal Ministry for Economic Cooperation and Development and KfW. In 2017, the Caribbean Development Bank, with resources provided by Mexico, approved a grant to CCRIF SPC to provide enhanced insurance coverage to the Bank’s Borrowing Member Countries and in 2018, the Government of Ireland provided support to CCRIF.