Belmopan, Belize, August 23, 2011 – The Caribbean Community Climate Change Centre (CCCCC) and the Caribbean Catastrophe Risk Insurance Facility (CCRIF) have strengthened their partnership to be able to better assist Caribbean countries to develop climate change adaptation strategies. These two organisations currently play key roles in the collection and provision of critical information and knowledge on the impacts of climate change and by extension natural disasters on Caribbean countries. On August 9, 2011, the organisations signed a memorandum of understanding (MoU) to formalise this collaboration.

The MOU is designed to assist the governments of Caribbean States in understanding the risks of climate change to their economies and to the peoples of the region and will help to identify cost-effective adaptation measures to support greater climate change resilience at the local, national and regional level. This partnership therefore represents a timely intervention as it is well recognised and agreed that developing countries and small island nations like those in the Caribbean will be among the first and hardest hit by the adverse effects of climate change. In short, the relative burden of additional climate risk the region faces is the highest in the world, while at the same time we have fewer resources to adapt socially, technologically and financially. It is thus anticipated that climate change will have far-reaching effects on the sustainable development of the Caribbean, including our ability to realise the United Nations Millennium Development Goals by 2015.

To better address climate adaptation in the region, this MoU will enable the countries of the region to:

At the signing ceremony of the MoU, which  took place at the  CCCCC  office in Belmopan, Belize,  Mr Milo Pearson, Executive Chairman of CCRIF signed on behalf of  CCRIF while Dr Kenrick Leslie, Director of CCCCC signed for the CCCCC. Dr Leslie emphasised the importance of regional collaboration and said that the signing of the MOU will strengthen the partnership between the two organisations. Mr Pearson further noted that the MoU “affirms our mutual commitment to finding solutions that will enable the countries within the region to better manage the risk caused by natural hazards and climate change and to minimise the social, economic, physical and environmental damage caused by these events.”

This collaboration represents an important step where, in small countries and small economies like those in the Caribbean, a single-event catastrophe such as a hurricane can have devastating socio-economic effects. Furthermore, these effects are predicted to be exacerbated by the impacts of climate change. The changing climate is a global driver of increasing disaster risk and threatens to undermine the critical development gains made by the most vulnerable countries. In fact, this is supported by the preliminary results of a study on the Economics of Climate Adaptation (ECA) in the Caribbean conducted in 2010 by CCRIF, CCCCC, and other partners, with analytical support from McKinsey & Co. and Swiss Re. The results indicate that annual expected losses from wind, storm surge and inland flooding currently amount to up to 6% of GDP in some countries and that, in a high climate change scenario, expected losses could increase by 1 to 3 percentage points of GDP by 2030.

Dr Ulric Trotz, Science Advisor at CCCCC, welcomed the signing of the agreement. He indicated that the ECA study which determined the economic costs of adaptation promises to be of great value to the region and hoped that the MoU “would help our two organisations to work together to better define a risk profile for the Caribbean – a risk profile that can form a basis for the design and provision of a range of affordable insurance instruments for the region.” 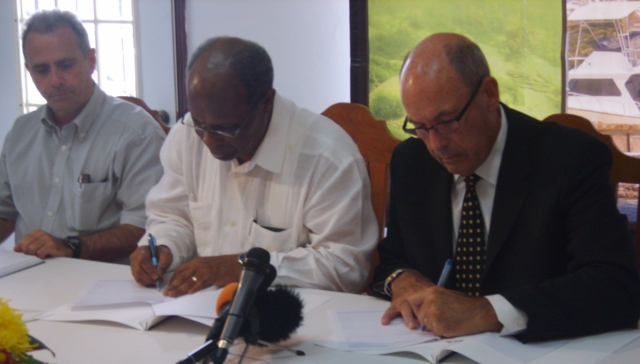 About CCRIF: CCRIF is a risk pooling facility, owned, operated and registered in the Caribbean for Caribbean governments. It is designed to limit the financial impact of catastrophic hurricanes and earthquakes to Caribbean governments by quickly providing short term liquidity when a policy is triggered. It is the world’s first and, to date, only regional fund utilising parametric insurance, giving Caribbean governments the unique opportunity to purchase earthquake and hurricane catastrophe coverage with lowest-possible pricing. CCRIF represents a paradigm shift in the way governments treat risk, with Caribbean governments leading the way in pre-disaster planning. Also, within the wider discussion on climate change, CCRIF is highlighted as the only working model of a multi-national and parametric-based catastrophe risk pool and is considered a viable template for expansion and/or replication globally as part of the overall climate change adaptation framework. Furthermore, there is increasing recognition that there needs to be coupling of risk transfer and risk mitigation activities for effective adaptation to climate change. CCRIF’s engagement in supporting disaster risk mitigation demonstrates the broader role that catastrophe risk management tools can play in holistic adaptation strategies.