Grand Cayman, Cayman Islands, October 25, 2021. CCRIF has recently provided another grant to the Government of Belize of US$43,140 to further enhance its early warning systems for extreme rainfall events. Since 2017, CCRIF has been supporting Belize to purchase and install automatic weather stations with grants totalling US$143,000. The first grant of US$100,000 in 2017, facilitated the purchase of 30 new automatic weather stations that were installed throughout the country. With the 30 weather stations provided by CCRIF, Belize now has 52 working weather stations with high quality rain gauges, making the country one of the Caribbean’s best equipped in terms of its national rainfall monitoring network coverage. According to a recent situational analysis related to the regional monitoring network of automatic weather stations in the Caribbean conducted by the Caribbean Institute for Meteorology and Hydrology (CIMH), with support from CCRIF, Belize’s network provides 70 per cent of what the optimal coverage should be. CIMH further recommends that 10 additional rainfall stations be installed in Belize given the size of the country and its topography. 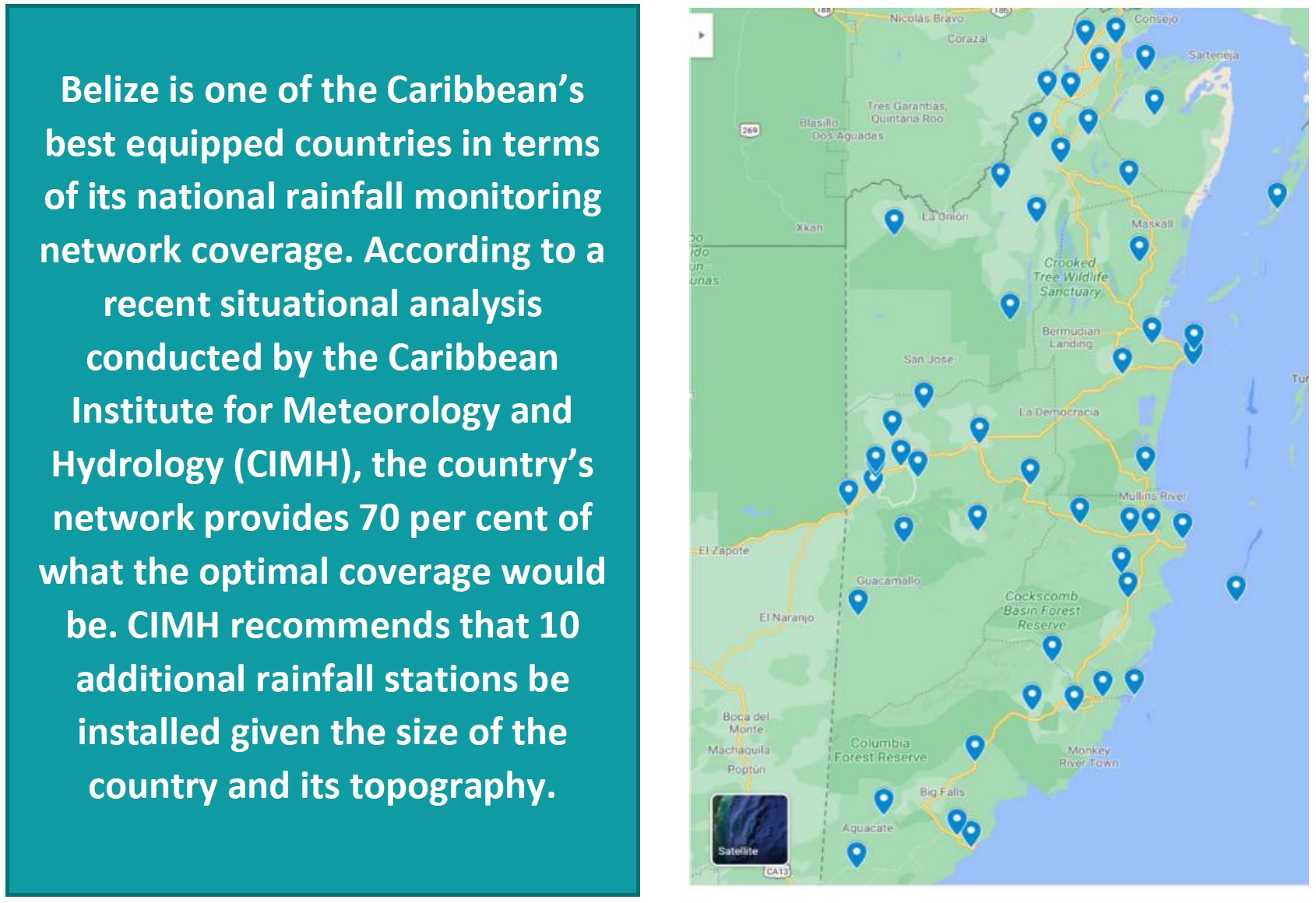 This new grant will be used to install air temperature sensors on the country’s 52 weather stations, enclosures for these sensors, additional rain gauges as well as protective “bird spikes” for all the gauges. The addition of the air temperature sensors will contribute to increasing the number of weather and climate variables that can be monitored by the National Meteorological Service of Belize.

These weather stations allow for the real-time flow of data to the Met Service which then allows forecasters and meteorologists to monitor and provide alerts to the population prior to severe weather events to inform preparedness activities. This is key to reducing damage and other negative impacts on population, infrastructure and animals/livestock associated with rainfall and tropical cyclone events such as tropical storms and hurricanes. Overall, these weather stations play a key role in strengthening the capacity of the country’s early warning systems, thereby enabling the Met Service and other agencies to undertake better planning for climate change and disaster risk management.

Chief Meteorologist, Mr. Ronald Gordon, indicated that “the installation of additional rainfall and temperature sensors funded through this grant from CCRIF will help us, at the National Meteorological Service of Belize, to better monitor these two important variables in real time across much of the country. This will, in turn, enhance our ability to, among other things, alert residents of the potential for flooding from heavy rainfall events as well as provide more data for us to do more detailed and reliable analysis of climatic trends across Belize.”

CCRIF CEO, Mr. Isaac Anthony, revealed that, based on the results of the situation analysis undertaken by CIMH covering CCRIF’s 19 Caribbean members, the Facility will investigate providing some support to Caribbean members to enhance their rainfall monitoring networks. Mr. Anthony stated, “any assistance provided will create more reliable systems to collect rainfall data, which will not only enable these countries to improve their own national disaster risk management systems but also will provide better rainfall data to support CCRIF’s Excess Rainfall model and parametric insurance product”. As CCRIF continually seeks to improve its parametric insurance models, it is currently examining the feasibility of incorporating locally collected rainfall data into its rainfall model.

CCRIF also supported the National Meteorological Service of Belize between 2011 and 2016 to enable them to build their technical capacity. CCRIF provided scholarships to two staff members – Shaenae Young and Michele Smith – to complete their Bachelor of Science degrees in Meteorology at The University of West Indies. CCRIF also provided an additional scholarship to Ms. Young to complete a Master of Science degree in Applied Meteorology focusing on agrometeorology at the University of Reading in the UK. Her postgraduate research focused on the effect of drought on the water balance and crop yields in Belize. Today, Ms. Young heads the Agro-Climatic Section of the Met Service where she is working on addressing the need for improved preparedness strategies to address climate variability and change in time and space and the increase in extreme events in weather and climate.

The Government of Belize has been a member of CCRIF since the Facility was formed in 2007. CCRIF’s mandate focuses on providing parametric insurance to the Caribbean and Central America for tropical cyclones, earthquakes, excess rainfall and fisheries and transmission and distribution systems in the electric utilities sector. However, it recognizes the role of risk transfer instruments such as parametric insurance in comprehensive disaster risk management and climate change adaptation. To this end, it has had in place since 2010 a well-defined technical assistance programme to support member governments, local civil society organizations, academia, regional organizations and individuals in the areas of climate change adaptation and disaster risk management. CCRIF has been working with several organizations to develop and implement climate adaptation solutions and ecosystem-based solutions to build resilience. The Facility also has been providing scholarships at the undergraduate and postgraduate level and internships to recent university graduates to build the capacity of young persons to become the future disaster risk management and climate leaders for the region.