CCRIF SPC Provides USD250,000 to The University of the West Indies for Scholarships and Tuition Fees

Kingston, Jamaica, December 1, 2020. On November 26, CCRIF SPC (formerly the Caribbean Catastrophe Risk Insurance Facility) presented a cheque for US$250,000 to The University of the West Indies (The UWI) for scholarships and for covering the tuition fees of students who are in need of financial support this academic year. 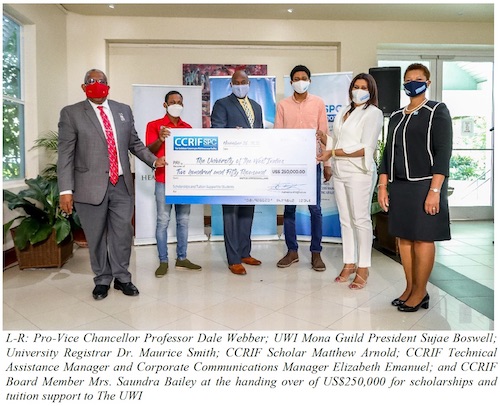 Approximately US$108,000 of the US$250,000 is already allocated for scholarships for 2020/21 at the undergraduate and postgraduate levels and this is about the usual amount that CCRIF has been providing to The UWI annually since 2010 and can be considered merit scholarships since they are based largely on the performance of students. The remaining US$142,000 has been provided to cover the tuition fees of the most needy students, who due to the COVID-19 pandemic are finding it difficult to pay tuition and who are at risk of either being de-registered or not completing their studies. This latter support is part of the Facility’s COVID-19 response geared to supporting our members and other key stakeholders.

According to Saundra Bailey, CCRIF Board Member “Since 2010, CCRIF has provided The UWI with 71 scholarships totalling US$761,230. CCRIF continues to view its investments in scholarships as critical to building a cadre of individuals who possess the knowledge and skills to advance the resilience of the small island and coastal states of our region.”

Outside of support to students at The UWI, graduates of The University also have benefited from CCRIF scholarships to study for postgraduate degrees in the USA and the UK as well as internships at national and regional organizations involved in disaster risk management and meteorology and at a number of departments and centres of The University itself such as the Disaster Risk Reduction Centre, Climate Studies Group Mona and the Seismic Research Centre.

University Registrar, Dr. Maurice Smith in acknowledging CCRIF’s contributions, commented that both The UWI and CCRIF have had a longstanding relationship and today’s handing over ceremony is significant as it is an expression of support not only for the regional institution but the talented students who are pursuing programmes related to CCRIF’s mandate.

Professor Dale Webber, Principal of the Mona Campus and Pro Vice-Chancellor with responsibility for Climate Change and Disaster Preparedness, signaled his gratitude for the tuition support for students in civil engineering, geography and geology. He asked CCRIF to consider students pursuing programmes in actuarial science, computer science and social work as these areas are critical to strengthening the region’s response to disaster management.

Earlier this year, CCRIF expanded its partnership with The UWI even further when the two organizations signed a new memorandum of understanding which went beyond offering scholarships and established a framework for the promotion and facilitation of disaster risk management, including modelling, disaster risk financing, and climate change adaptation as well as research, capacity-building and resilience-building initiatives that will support and advance the Caribbean Community’s (CARICOM’s) ambition of making the Caribbean the world’s first climate-resilient zone.

One of the first outputs of this new MOU was the development of a new course called Fundamentals of Disaster Risk Financing for Advancing Sustainable Development of Small Island Developing States (SIDS), which is currently being offered through The UWI Open Campus. Over 30 students are members of the first cohort to take this Continuing and Professional Education Certificate course, which offers four continuing education units.

Including today’s contribution, CCRIF’s overall support to The UWI over the period 2010 – 2020 has totalled over US$1 million, through programmes for scholarships and internships and the current MOU as well as two grants to the departments of Food Production and Geography at the St. Augustine campus for community-based disaster risk reduction projects, support to the Seismic Research Centre towards establishing and maintaining a new accelerometric network in the Eastern Caribbean and Jamaica to enhance the capability for identifying and mitigating seismic risk in the Caribbean, and a contract with Lumin Consulting for work related to the CCRIF-Caribbean Development Bank Integrated Sovereign Risk Management Project.

CCRIF also used the occasion to launch its Technical Paper Series #4, “A Collection of Papers and Expert Notes on Disaster Risk Financing and Disaster Risk Management ... Highlighting academic papers prepared by a selection of CCRIF scholarship winners”. This collection of papers highlights research conducted by nine recipients of CCRIF scholarships between 2010 and 2017. The academic papers include papers completed as part of course work, extracts from dissertations, as well as complete dissertations – all submitted as part of their degree requirements. The papers demonstrate the diversity of research topics undertaken by CCRIF scholarship recipients – which range from social issues such as a discussion of whether disaster scenes should be “off-limits” to victims’ relatives, and climate and risk communication to an analysis of the financial services sector responses to climate change risks to more technical discussions such as seismic analysis. 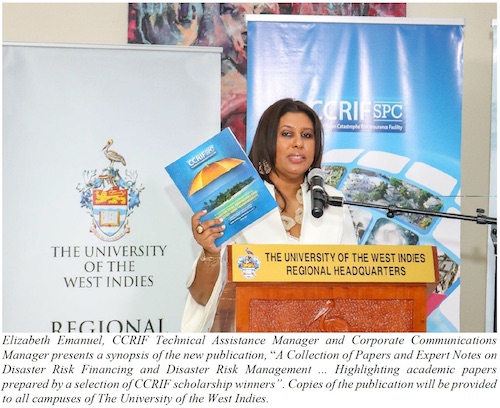 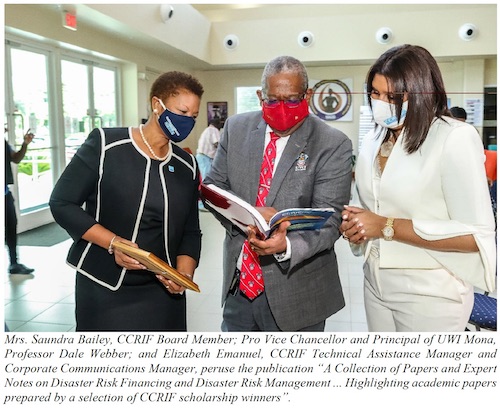 According to Mrs. Bailey, “During this pandemic CCRIF has both levelled up and pivoted to ensure that our members and key partners and stakeholders are able to better confront and address the many challenges posed by climate change and COVID-19, with The UWI being one such partner.”

About CCRIF SPC:
CCRIF SPC is a segregated portfolio company, owned, operated and registered in the Caribbean. It limits the financial impact of catastrophic hurricanes, earthquakes and excess rainfall events to Caribbean and Central American governments by quickly providing short-term liquidity when a parametric insurance policy is triggered. It is the world’s first regional fund utilising parametric insurance, giving member governments the unique opportunity to purchase earthquake, hurricane and excess rainfall catastrophe coverage with lowest-possible pricing. CCRIF was developed under the technical leadership of the World Bank and with a grant from the Government of Japan. It was capitalized through contributions to a Multi-Donor Trust Fund (MDTF) by the Government of Canada, the European Union, the World Bank, the governments of the UK and France, the Caribbean Development Bank and the governments of Ireland and Bermuda, as well as through membership fees paid by participating governments. In 2014, a second MDTF was established by the World Bank to support the development of CCRIF SPC’s new products for current and potential members and facilitate the entry of Central American countries and additional Caribbean countries. The MDTF currently channels funds from various donors, including: Canada, through Global Affairs Canada; the United States, through the Department of the Treasury; the European Union, through the European Commission, and Germany, through the Federal Ministry for Economic Cooperation and Development and KfW. Additional financing has been provided by the Caribbean Development Bank, with resources provided by Mexico; the Government of Ireland; and the European Union through its Regional Resilience Building Facility managed by the Global Facility for Disaster Reduction and Recovery (GFDRR) and The World Bank.

About The UWI
For over 70 years The University of the West Indies (The UWI) has provided service and leadership to the Caribbean region and wider world. The UWI has evolved from a university college of London in Jamaica with 33 medical students in 1948 to an internationally respected, regional university with near 50,000 students and five campuses: Mona in Jamaica, St. Augustine in Trinidad and Tobago, Cave Hill in Barbados, Five Islands in Antigua and Barbuda and an Open Campus. As part of its robust globalization agenda, The UWI has established partnering centres with universities in North America, Latin America, Asia, Africa and Europe including the State University of New York (SUNY)-UWI Center for Leadership and Sustainable Development; the Canada-Caribbean Institute with Brock University; the Strategic Alliance for Hemispheric Development with Universidad de los Andes (UNIANDES); The UWI-China Institute of Information Technology, the University of Lagos (UNILAG)-UWI Institute of African and Diaspora Studies; the Institute for Global African Affairs with the University of Johannesburg (UJ); The UWI-University of Havana Centre for Sustainable Development; The UWI-Coventry Institute for Industry-Academic Partnership with the University of Coventry and the Glasgow-Caribbean Centre for Development Research with the University of Glasgow.

As the region’s premier research academy, The UWI’s foremost objective is driving the growth and development of the regional economy. The world’s most reputable ranking agency, Times Higher Education, has ranked The UWI among the top 600 universities in the world for 2019 and 2020, and the 40 best universities in Latin America and the Caribbean for 2018, 2019 and 2020. The UWI has been the only Caribbean-based university to make the prestigious lists. For more, visit www.uwi.edu.

(Please note that the proper name of the university is The University of the West Indies, inclusive of the “The”, hence The UWI.)